Sindhura Anamali B.D.S., M.S
Diplomate of the American Board of Oral and Maxillofacial Radiology
Clinical Assistant Professor
Department of Oral Pathology, Radiology and Medicine 1,2
The College of Dentistry and Clinics,
The University of Iowa
sindhura-anamali@uiowa.edu
Ph: 319-335-8956

Florid osseous dysplasia (FOD), is a broad form of periapical osseous dysplasia (POD) involving multiple quadrants {Neville, 2015 #36} . Like POD, FOD occurs predominantly in middle-aged females with a significant predilection for African Americans and to a lesser extent in Asians. This condition is characterized by replacement of normal cancellous bone with fibrous tissue and dense amorphous bone. This case presents the findings of a CBCT that was obtained on a 58 year old African American female and reviewed by a board- certified oral and maxillofacial radiologist. The findings were of an atypical presentation of florid osseous dysplasia with multifocal expansion and simple bone cysts. Though florid osseous dysplasia is not an uncommon finding, the extent and presentation of this case is unusual and has definite educational value as it shows the extent of progression of a more severe case and the important role of clinicians in the diagnosis and treatment planning.

With the introduction and acceptance of CBCT use in dentistry the ability to more completely visualize the jaws has increased. With this increased ability to visualize the anatomical structures of the jaws there is also an increased ability to visualize pathological conditions. Greater radiographic insight of various pathoses have led to greater diagnostic abilities. 1 Visualization of relationships between pathoses and anatomic structures has also been a great benefit by the use of CBCT giving dentists and surgeons more certainty to treatment options and better treatment planning. severe case and the important role of clinicians in the diagnosis and treatment planning.

3 stages of OD have been described to include the osteolytic stage; a radiolucent appearing stage, the cementoblastic stage; a radiolucent area with radiopaque zones, and the mature stage; with definite radiopaque masses in the majority of the lesion. 5 Careful radiographic diagnosis is important, because biopsy and surgery are typically undesirable and might lead to complications including poor healing and osteomyelitis. 6, 7

The case reported is of a 58 year old African American female who presented with an enlargement of the mandible. She did not report any family history of such a presentation, her health history was unremarkable. A CBCT was made on an i-CAT Next generation machine (Imaging Sciences International, Hartsfield, PA), the field of view was 16cm X 13cm made at 0.25mm resolution and was reviewed by a board-certified oral and maxillofacial radiologist. Among the findings noted were multiple expansile, mixed radiolucent/radiopaque entities present bilaterally in both the maxillae and the mandible. There was extensive involvement of the mandible from the mandibular right third molar to the mandibular left third molar regions with displacement of the inferior alveolar canals inferiorly, as well as extensive expansion of both the facial and lingual cortical plates. The cortices of the mandible were maintained albeit with very thin borders. The mandibular anterior teeth have been minimally displaced with no evidence of resorption of the roots. In the posterior aspect of both the right and left maxillae there was expansion of the cortices in the facial and palatal directions. The cortices were maintained with minimal evidence of tooth displacement and no evidence of root resorption. There was displacement of the floor of the right maxillary sinus. There were simple bone cysts in the apical regions of the maxillary right first molar and bilaterally in the right and left body and anterior region of the mandible. Incidental findings included generalized minimal periodontal bone loss, a mucus retention pseudocyst on the lateral wall of the left maxillary sinus, mild degenerative changes of the cervical vertebrae, and multiple carotid artery calcifications bilaterally in both the parasellar region and in the neck region. Considering the nature of the condition it was not warranted to biopsy at the time of the examination. Patient has been advised and educated to adapt good oral hygiene practices, prophylaxis and regular follow up to prevent possible complications with this condition. A follow up was scheduled in a year unless in the unlikely scenario the patient became symptomatic.

Osseous dysplasias are relatively a frequent condition occurring in the jaws in black females typically in the 4 th to 6 th decades of life. 6-10 Typical cases of osseous dysplasia have been frequently and comprehensively described in the literature. They are generally categorized into periapical, focal and florid types 11 , based on the presentation and scope of findings visualized, however there are very few cases which have been reported which exhibit such extreme findings as in this case. The prevalence of these variants are periapical (57.3%), focal (28%), and florid (14.6%) and other extreme variants less than 0.1% of the cases. 11 Periapical osseous dysplasias are in the apical regions of anterior teeth, focal variants are usually associated with a single tooth and the florid variants are those in which there is multifocal involvement with lesions in more than one quadrant in the jaws. These entities may be radiolucent in the early stages, mixed radiolucent radiopaque in the intermediate stage and almost completely radiopaque in the mature stages. 8, 9, 12

Florid cemento osseous dysplasias (FCOD) have been reported in the past, only few cases of severe expansile osseous dysplasias have been presented in the literature. FCOD have a predilection for African American and middle age females. The characteristics of FCOD in the initial stages are similar to those of periapical lesions of inflammatory origin, which may lead to misdiagnosis. 13

Florid osseous dysplasias can present in a wide spectrum from initial radiolucent stages to intermediate mixed radiopaque –radiolucent lesions to completely mature radiopaque stage in multiple quadrants. Some lesions can cause significant expansion and can cause facial disfigurement and may be accompanied with simple bone cysts. Early detection and correct diagnosis is prudent in these patients to prevent possible complications that could result from unnecessary work up such as biopsies, improper diagnosis and treatment planning.

Due to the decreased vascularity within areas of FOD it is important to make a proper radiographic diagnosis thus preventing intervention which may unnecessarily increase the risk of infection. 2, 3, 5 It is important for clinicians to be well informed that a biopsy is contraindicated in these lesions as it can make the condition worse. Conservative approaches such as broad spectrum antibiotics in case of infections along with periodic follow-up and good oral care is advised. 16 Caution in identification and diagnosis should be taken, as unnecessary treatment, such as root canal therapy, may result when it should be avoided. 17-19 Good oral hygiene practices should be advised to the patient to prevent secondary infection. 2, 3, 5, 20, 21 No treatment is necessary unless it becomes a cosmetic concern.

Conflict of Interest: None 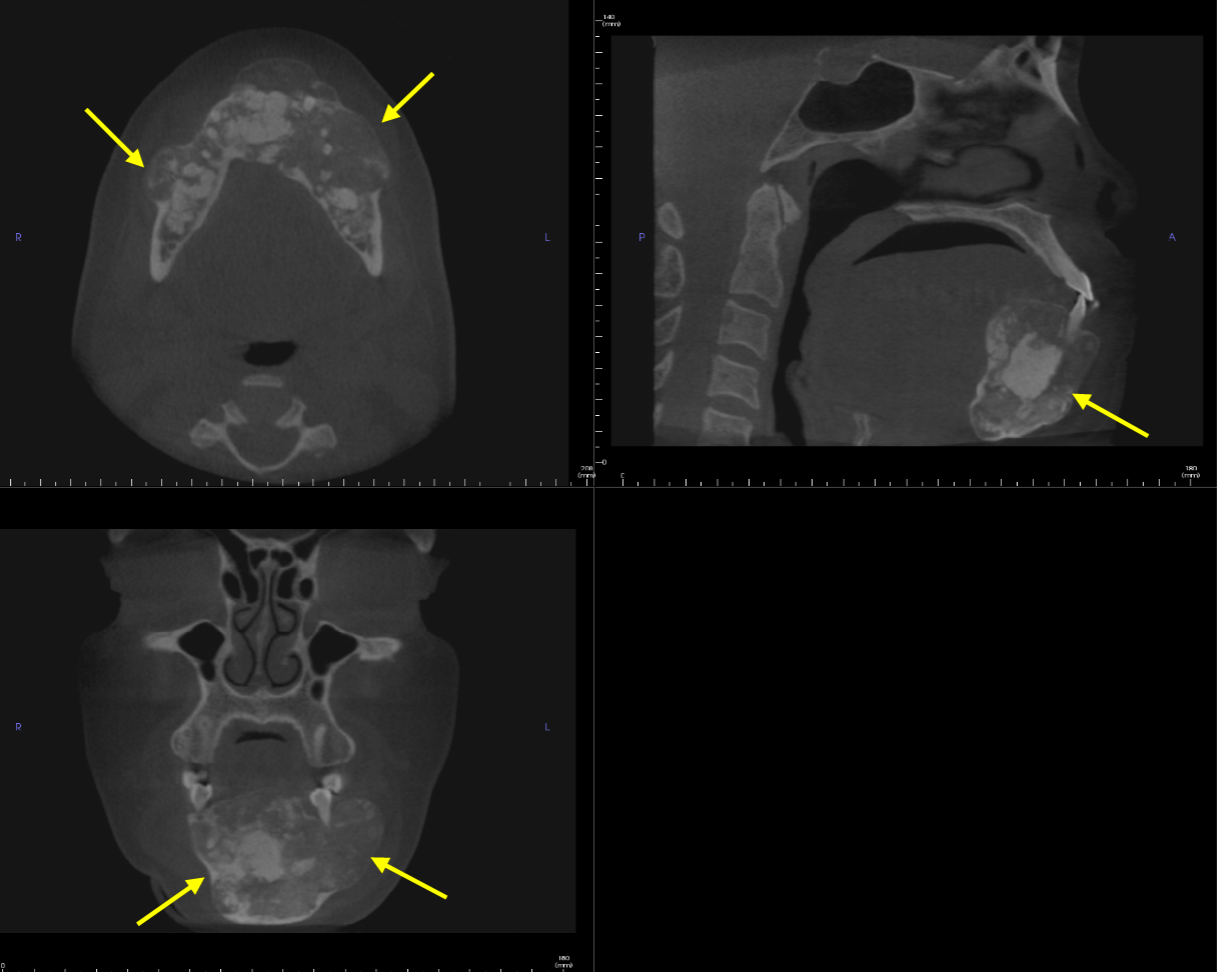 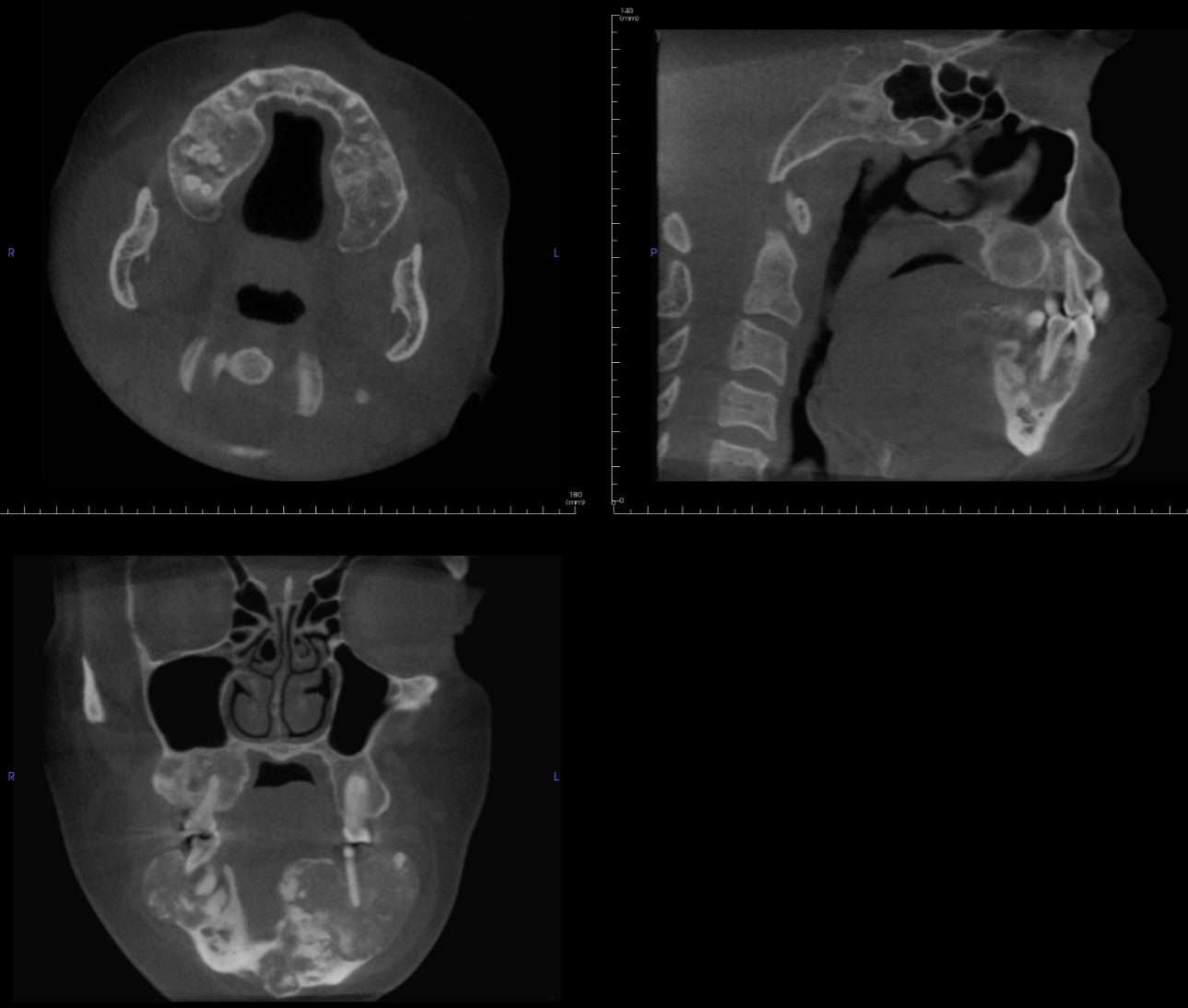 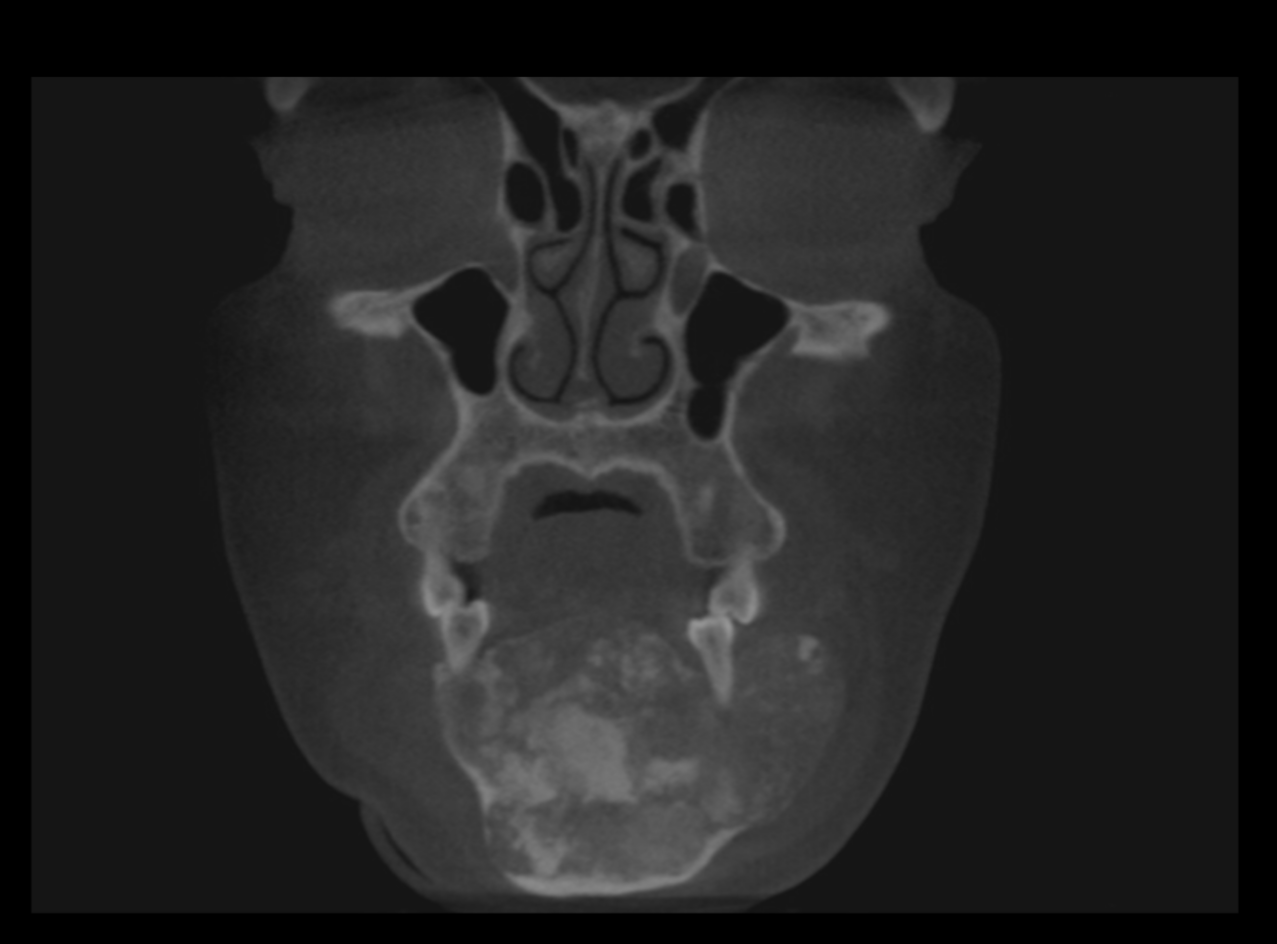 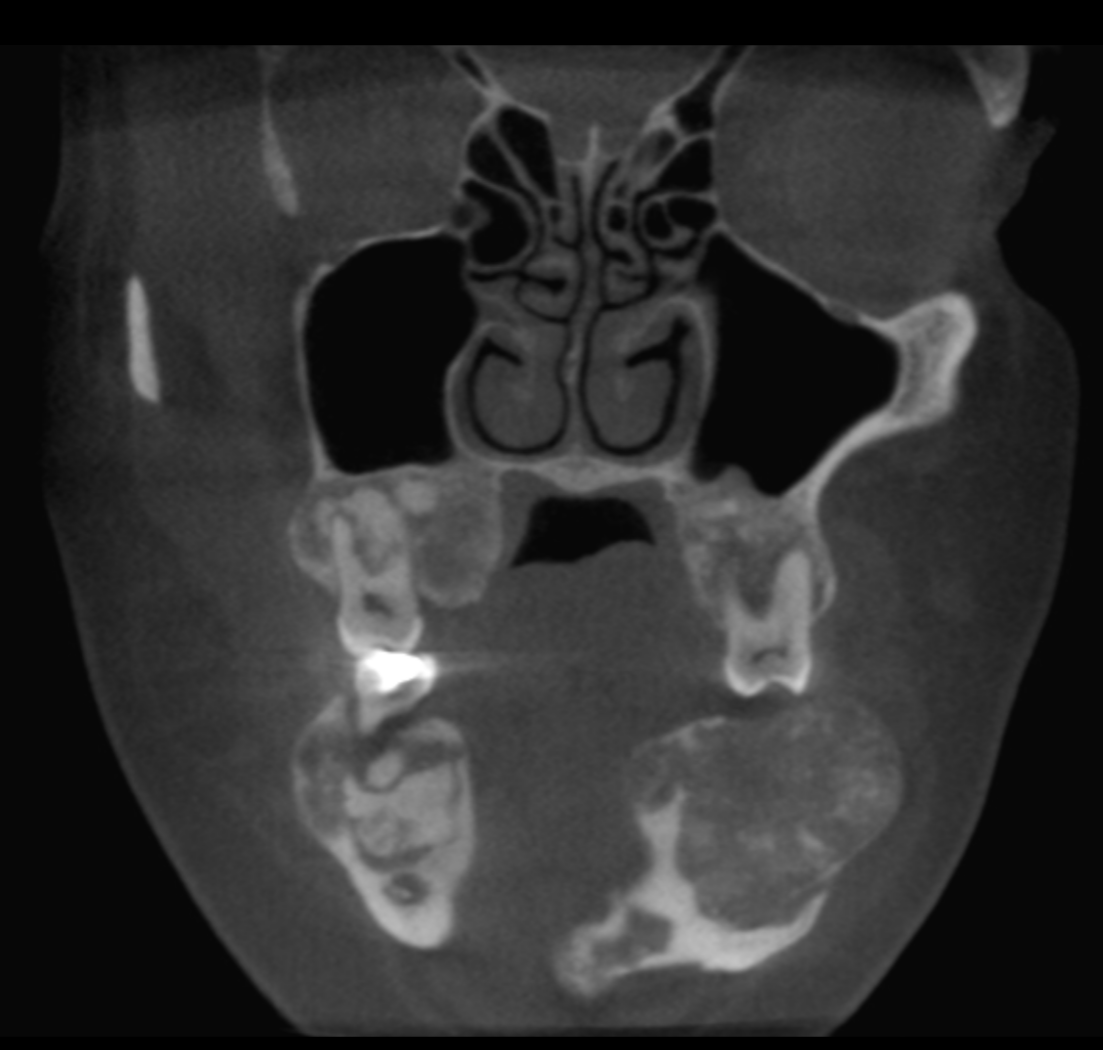 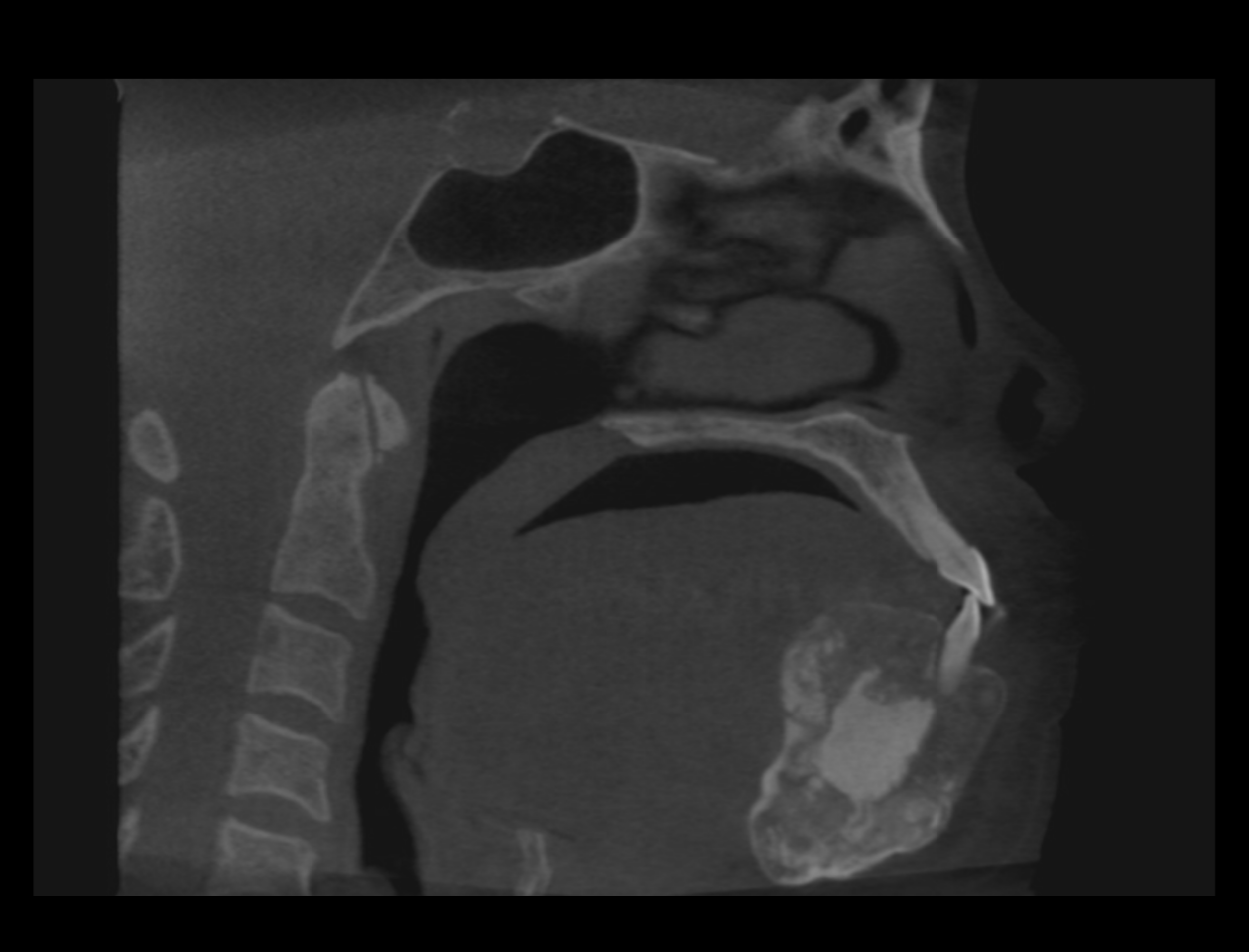 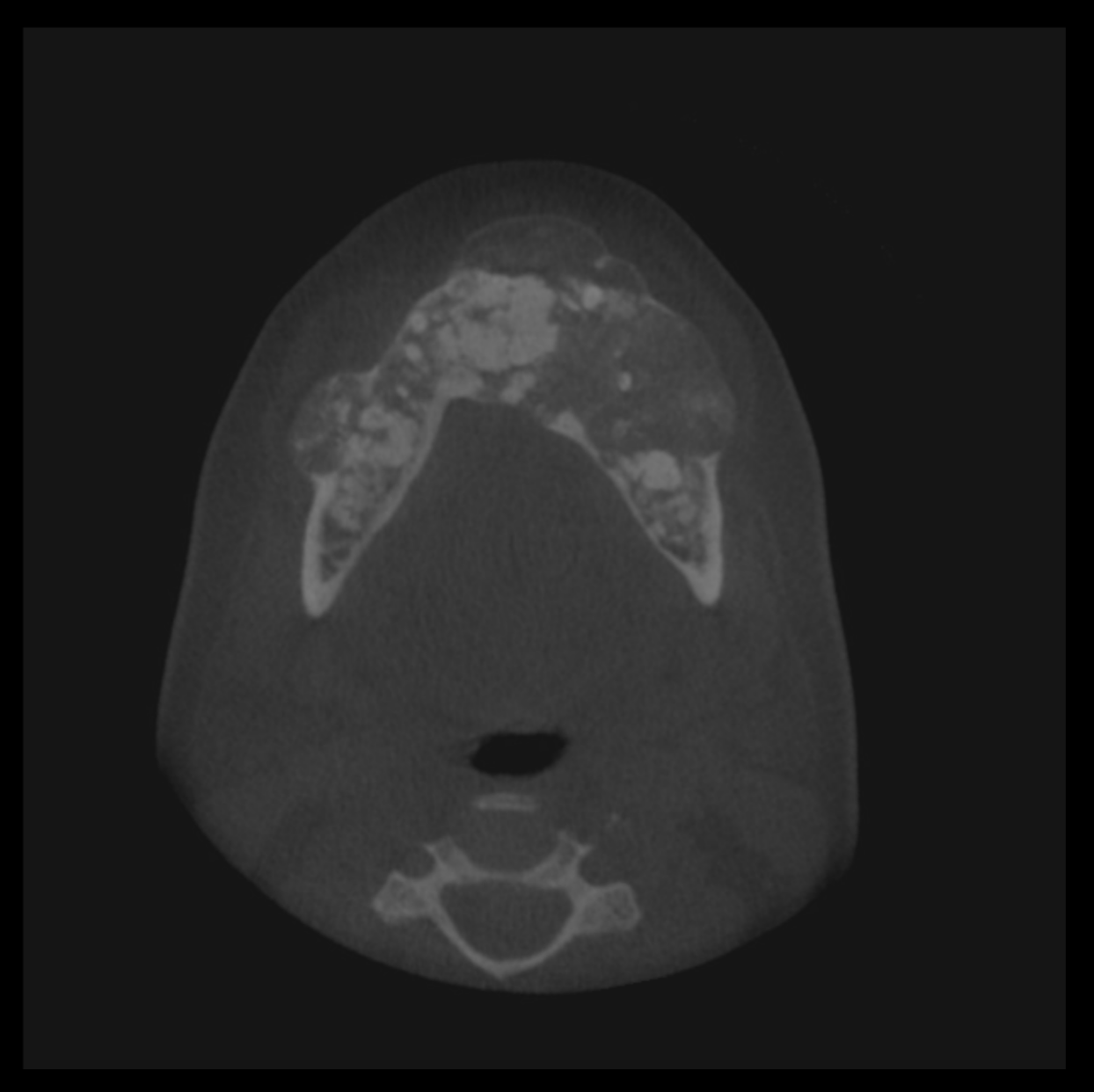 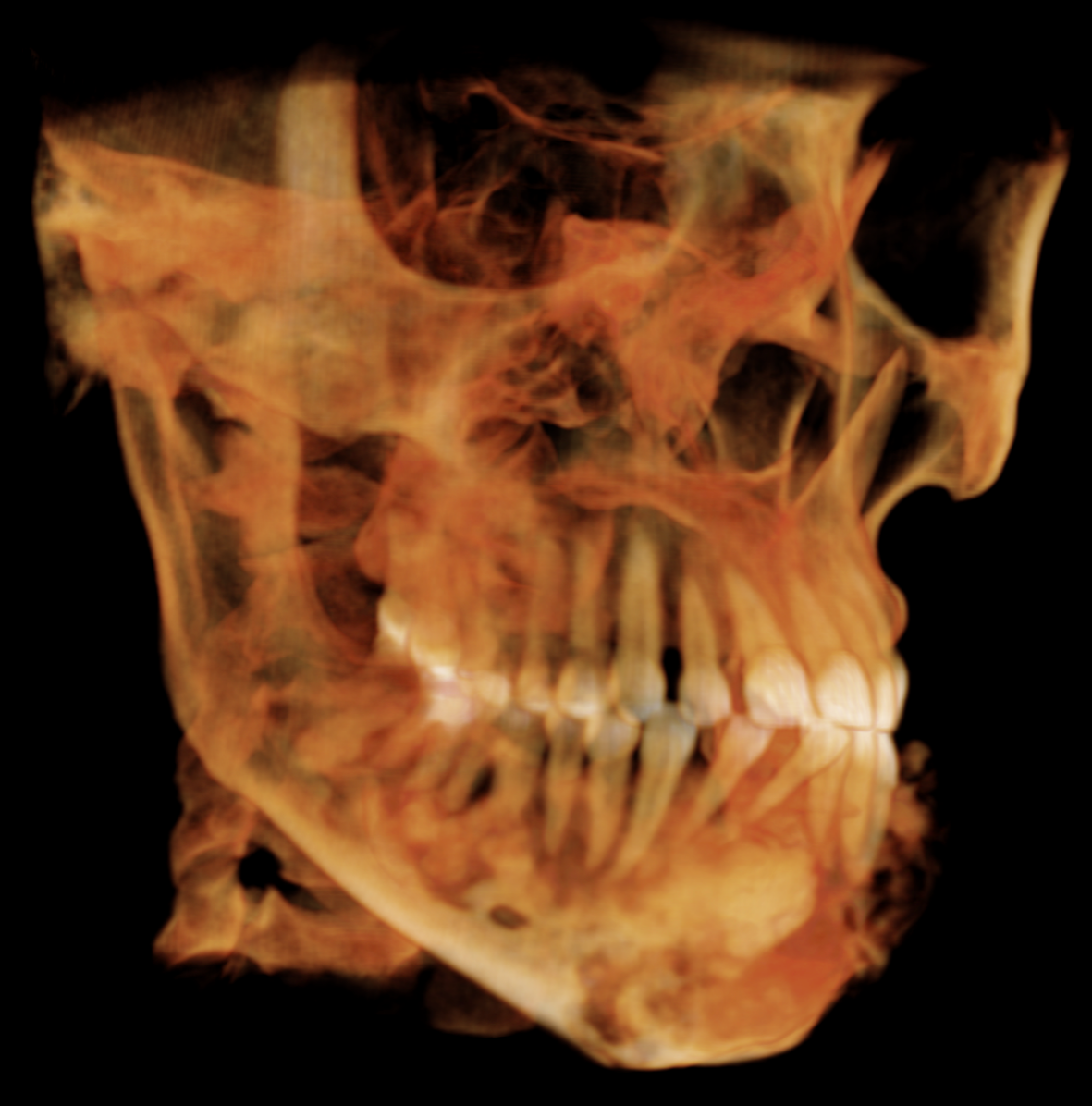 Volume rendered CBCT image; showing multiple expansile and lobulated radiopaque areas in the right side of the mandible and the maxilla.

Volume rendered CBCT image; showing multiple expansile and lobulated radiopaque areas in the right side of the mandible and the maxilla. 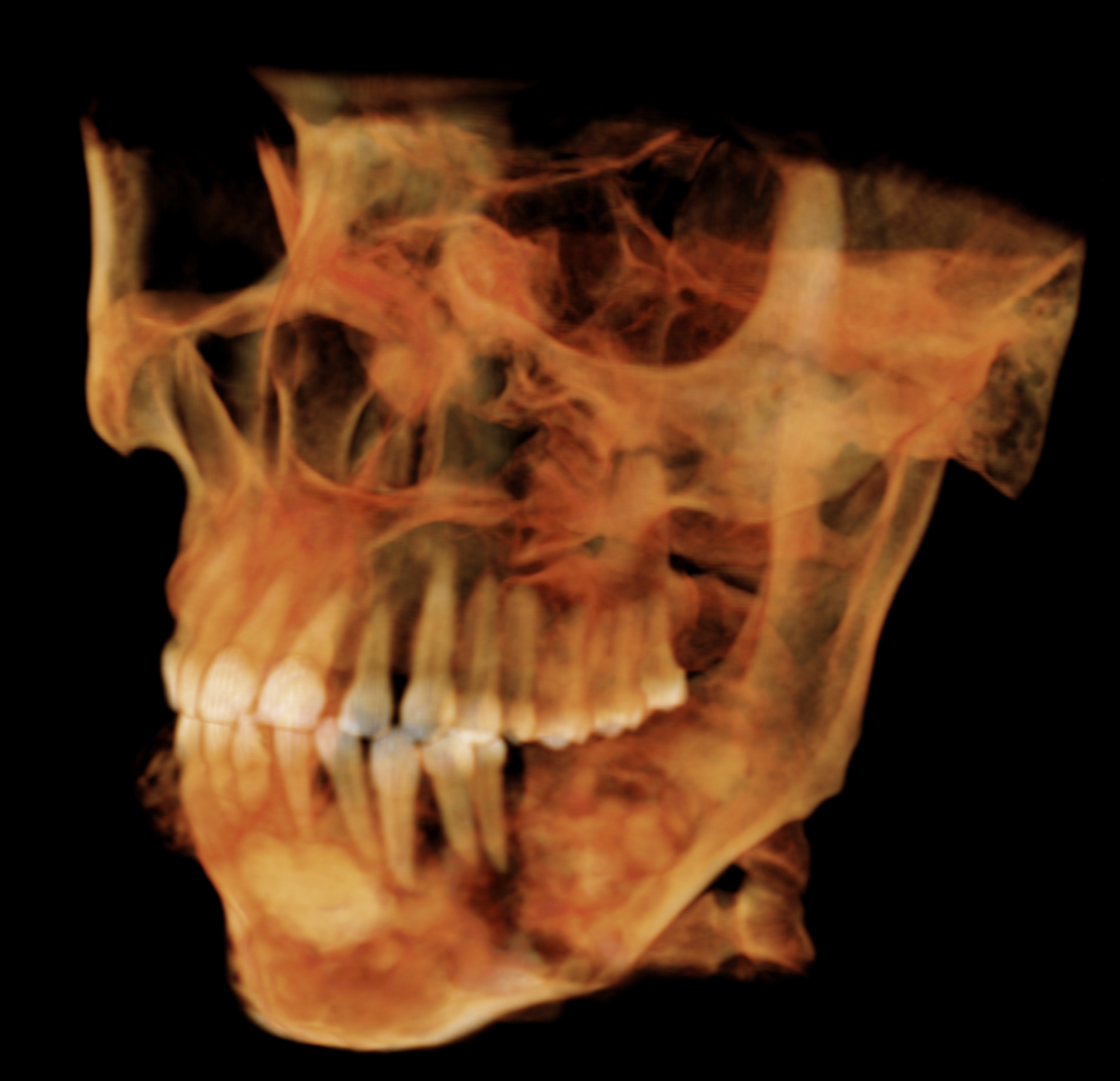 Volume rendered CBCT image, showing multiple expansile and lobulated radiopaque areas in the left side of the mandible.

Volume rendered CBCT image, showing multiple expansile and lobulated radiopaque areas in the left side of the mandible.

Image 7: Volume rendered CBCT image; showing multiple expansile and lobulated radiopaque areas in the right side of the mandible and the maxilla.

Image 8: Volume rendered CBCT image, showing multiple expansile and lobulated radiopaque areas in the left side of the mandible.

XDR’s sensors maximize mesial imaging area to help you capture challenging canine-premolar contacts. In synergy with XDR Software, our top tier contrast and spatial resolution mean you’ll see both the subtlest of lesions and the tip of your #6 file.

XDR sensors’ rounded and beveled corners broaden the contact zone for increased patient comfort, matching the mouth’s contours. The sensor’s distinctive bright face eases intraoral visibility. The sleek button on its hermetically sealed shell allows for easy cleaning. XDR’s cord plugs directly into the computer, protects with its Kevlar reinforcement, and can be replaced for much less than the cost of a sensor.

XDR Radiology is available through both GSA and ECAT contracts.

XDR Radiology was founded with the goal of making advanced computer-based technologies more accessible and clinically relevant to the dental practitioner. We partner with doctors and staff, IT professionals, universities, equipment and software manufacturers. A voting member of ADA’s SCDI standards committee, we have federal contracts through both GSA and ECAT.

XDR believes radiography should be provided by dentists to dentists. With clinical focus and personal feel – instead of corporate brashness – we deliver a top tier imaging solution without the top tier price, featuring unique, patented XDR Imaging Software and the Anatomic Intraoral Sensor.

We design our own sensors and write our own software. Every decision is based on dentistry and science. Every doctor matters. Every call counts.